I don’t know what I thought the The Last Picture Show was going to be about, but I didn’t think it would be about how sex is used like power. But, yeah, that’s one of its major thematic riffs, and it’s pretty ruthless about it, in that good, artistic way of being ruthless. This movie and even just this element are worth more explication, but here I’m just looking at one sub-motif about sex in this movie: the straight-on close-ups of certain faces.

To begin with, there’s the prostitute, Jimmie Sue. First, we only see her in the darkness, but we hear her castrating, real-time mockery of Billy, the mute and possibly developmentally delayed teenager she’s deflowering in the backseat of a car. Finally, after she’s kicked him out, she emerges, and it’s positively unnerving. 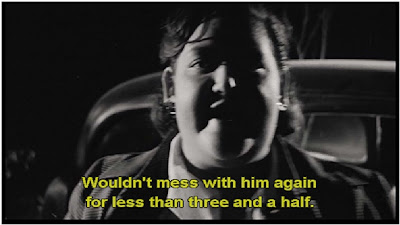 We’re finally seeing her face for the first time, and she’s a fuming monster, looming closer and looking us right in the eyes, which is where a lot of the effect of this shot comes from. In theory, this could be a POV shot, but it doesn’t seem set up that way, since whose view it would be isn’t at all clear. So instead it seems like this sly manner of half-breaking the fourth wall, and makes us get how callous she is.

Next, there’s Bobby, a boy of means who’s hosting the pool party that Jacy (played by Cybill Shepherd) goes to. You have to understand, we’ve been getting to know her as a girl without fear, but now, as she approaches the object of her desire, we see him from her perspective, and he’s scary. 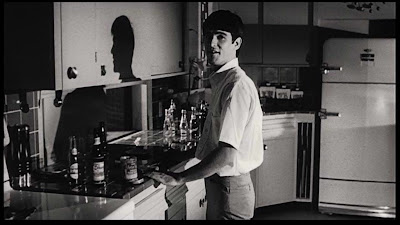 We’ve already seen Jacy lie to her boyfriend’s face, in a way that tells us she’s a bit of a snake, but this moment of fear gives us tender feelings for her.

So she approaches, and he sticks his hand directly on her crouch and kisses her. It’s hard to explain the tone of this conversation, but here’s how it goes:

Bobby: You a virgin?

Jacy: Guess I am.

Jacy: [pleading] I don’t wanna be, though.

Bobby: I don’t blame you. Come see me when you’re not.

It’s this last line, the way it’s said with such carelessness and self-satisfaction, that turns her into a beggar. In its own way, it’s horrible, not to mention the smug look on his face: 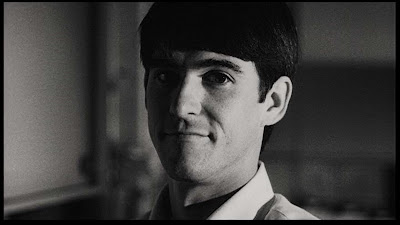 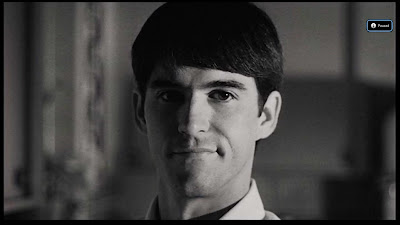 She looks at him sadly. Maybe she has not consciously consented to this beggar role, but she is playing it.

Finally, later in the movie Abilene drops by Jacy’s house, looking for her father.
She gives him a fixed gaze that says “sex” more powerfully than any words could (and in more vulgar language), and he invites her to the pool hall. 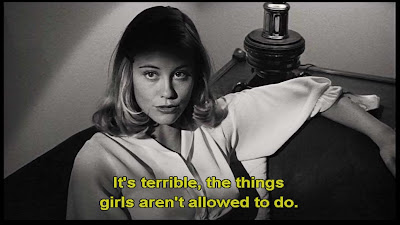 There they have sex on top of a pool table. The scene has no sound until she gasps a minute later, and in between she is some combination of passion and discomfort. Frankly, it’s hard to tell what she’s feeling. But by the time he’s dropping her off at her house, he refuses to kiss her. That cold look was all she was going to get, nothing soft or human attached to it. You know Jacy uses people herself, but still, you feel bad for her and know she’s too young to know entirely what she’s doing. 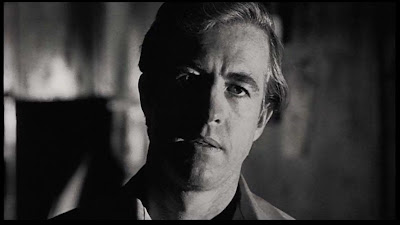 In each of these cases, with these faces taking up more than half the screen and looking at us directly, we cannot turn away from their essential lack of emotional or even sympathetic interest in their “romantic” partners.

They are as cold as stone. It’s hard to watch in a way that I wasn’t expecting, and that means it was good.