I finally finished Germany Year Zero yesterday, a Netflix DVD I’ve had so long I literally refuse to check my queue to see how long I’ve been sitting on it. 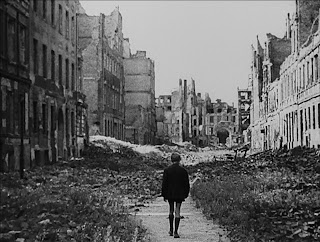 It’s the third part of Roberto Rossellini’s “War Trilogy,” the second part of which, Paisan, bowled me over. Germany Year Zero, however, well, not so much. I’ve been having trouble figuring out why, since the two movies are mighty similar. For one, in the blatantly obvious category, there are the settings: Shot in Germany and Italy soon after the end of World War II, both movies show you the real bombed-out cityscapes, crumbling versions of Berlin, Florence, Rome, etc., that are halfway back to nature. This falling apart has a magical effect. When a building begins to resemble a pile of bricks more than a school, a factory, or whatever workaday government office it was before, it reminds us that whatever we took for granted there as a social institution would only last as long as society itself does.

And that is why they’re the perfect metaphor for those societies, which in Rossellini’s films are living half by their civilized foundations and half by wild improvisation. There’s great danger but also great freedom in a city reduced to a pile of bricks. The fourth episode of Paisan, which is a man and a woman making their way through Florence as it is living through the last of the war, with executions in the streets and advances measured by the block, gave me a grand sense of adventure when I saw it last year, despite the merciless killing and the tragedy it encompasses.

Jonathan Rosenbaum calls Berlin in Germany Year Zero, “a terrain leveled spiritually and morally,” which is just right; the Berliners of GYZ are carrying the vestiges of the war and Germany before the war and are stumbling forward as a city, with moral rot chipping away at them and threatening to bring the whole thing down. 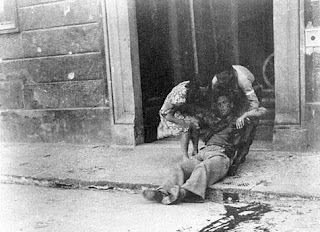 That look of a city of rubble is one thing that puts the two movies together, and then there’s Rossellini’s style, which, in these movies at least, is identifiable in a way that’s hard to identify. Scott Tobias says the War Trilogy has “old-fashioned melodrama” out in front of its disintegrating cities, and “melodrama” would be right if the emoting and whatnot felt overblown but dramatic.

And yet, the movies don’t feel overblown. They feel underblown, even the scenes that by all rights ought to be wrenching. Peter Brunette calls it Rossellini’s “dedramatization,” and it’s the mot juste for a drama that doesn’t quite seem dramatic. I think this is what Megan Carrigy in Senses of Cinema is trying to get at when she talks about the “distinctive experience of shattering and dislocation that occurs across Germany Year Zero.” To be more specific, as much as I can succinctly, I’ll say it’s the flatness of the actors and the way the scenes don’t seem very interested in the emotion they’re trying to convey. Maybe it’s just the neorealist style (nicely summarized in Tobias’s first paragraph), or maybe it’s Rossellini’s direction (though Rosenbaum has some quotes that really make you wonder), but the result is detachment, for me at least, from the goings-on of the movie.

This doesn’t totally explain my problem with GYZ, though, because Paisan was like this too, and there this whole “dedramatization” bag passed itself off as fresh and daring. For one, it felt subversive by denying the more obvious gestures of melodrama, instead going for a lot of unusual creative choices that seemed like a subtle challenge. And, somehow, the technique seemed to work there, maybe because Paisan brought together six shorter stories, all set in Italy during the Allied invasion, so the whole structure of the film had the awkwardness and lack of forward momentum that so many scenes in GYZ have. That sounds bad, but then maybe the effect in Paisan, being both on the large and small scale, was some kind of genius fractal thing. 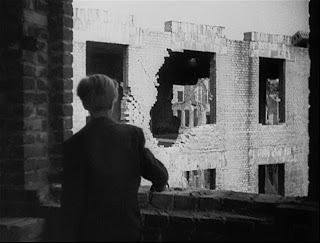 Perhaps it was just less noticeable because the sections of dramatic arc were short, but probably also because they also fit the theme of war as a confused, random experience that threw everything up in the air. This was even truer because Paisan never seemed to have a terribly strong theme to connect its stories, which had the perverse effect of making them seem all equally important, with the disparate bits (one part even takes place in a monastery and is kind of funny) just adding up to a big unprocessed whirlwind. That’s pretty much what a war might feel like, one imagines.

Germany Year Zero doesn’t have this excuse/reason for not-great acting and “dedramatization.” Yes, it’s moving, but more because the subject matter — I haven’t even gotten around to mentioning the Nazi pedophile — is so strong, not because of the execution. Maybe the little boy at the center of it represents Germany’s dilemma coming out of WWII, but he can become some kind of abstract symbol later, on his own time. For now, in the moment of watching the film, I want his experience to vibrate and cause sympathetic resonance with something inside me at a high-pitched frequency. As is, it doesn’t really do that.

2 thoughts on “germany year zero: a heap of rubble can be fascinating when you know it used to be a city”