For this fifth film in my series on Slate.com’s choice of sci-fi shorts from 2012, I’ve got Gamma, whose good and bad points have a lot of parallels with yesterday’s short, Seed. As with everything else in this series, I’m assuming you’ll watch before reading, so beware spoilers.

First, the positives. As in Seed, the visuals of Gamma are haunting and beautiful. And Gamma, again like Seed, gives us a world that feels possible and believable, in large part because of the images of decay and industrial rot that are familiar enough in our everyday lives, but also because the advertisement that begins the film feels like the real product of a hip ad agency.

The ad and the industrial disintegration form an fresh aesthetic that Gamma develops by pairing contrasts: the rotting and the brand-new, the industrial and the organic, the commercial and the candid. The organic is an especially nice touch, since sci-fi tends toward the metallic and seamless. The outsize green fungi are mysterious and terrifying, like much of untamed nature.

So there’s a lot to like. But then, even worse than in Seed, I found the plot to be confused and confusing. The story, told in a retrospective narrative, is borderline incomprehensible. I don’t think this was on purpose, since the narrative was close enough to cohesive that it seemed as though I might be missing something. Even after a second and third viewing, however, I still haven’t figured out the basic timeline of what occurred, so unless this movie is meant to be as disorienting as Primer, I don’t think it succeeded. (My first of many questions would be, If the company had already rehabilitated the city, which is the first thing the narrator mentions, why does he later describe evacuating?) 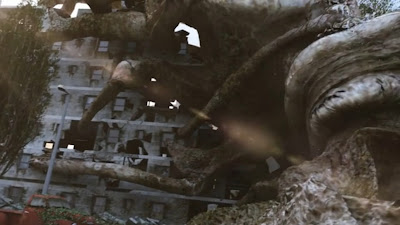 And again, as with Seed, if I don’t understand what’s happening, it’s hard for me to care, which is an important test of a movie. It’s too bad. Compared to the sci-fi of the other shorts I’ve looked at in this series, the biological technology of this short had maybe the richest potential for both metaphorical and narrative possibilities. The idea that an fungus-like organism would fix our environmental mistakes could say a lot about our relationship to the natural world, one infrequently examined in pop culture. As is, however, I’m just too lost to really get involved.