Okay, this is the sixth and last day of my reviewing Slate.com’s best sci-fi shorts of 2012, and boy are my arms tired.

Sight is the best of all the shorts, I think. Reviewing these things has got me thinking about how we take for granted that things will be laid out for us in a way that’s easy to follow, that continuity will only be broken in very intentional ways, and that the tone of the film will be clear enough for us to know what the filmmakers are going for at any moment.

Well, this one does all of these things well, which is remarkable for a sci-fi short of only a few minutes that also manages to pack in a lot of detail about how its futuristic gear works. Like Tempo, Sight introduces right away the new technology, the contact-lens mobile device that interacts with you through the eye. But where Tempo used a documentary test film — an organic but not wholly original way to work the tech into the plot — Sight is more innovative: We see through the lenses ourselves from the POV of Patrick, the lead character, and he’s playing a video game, an activity that’s easy to recognize for most of the Nintendo generation.

This communicates right away that the lenses can project anything at all into the wearer’s vision, as well as react to his movements. And we get all that without Patrick or anybody else actually explaining it in so many words. 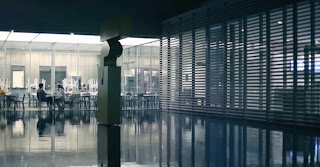 From there, the film presents the lenses’ other functions gradually, and we can slowly begin to see how they shapes the wearer’s world. I want to say more about that, but first I want to point out a great example of deft camera placement and editing, which you can check out in the screen grab above or in the film at about 5:00. Patrick is on a date, and the filmmakers need to communicate that time is passing and the romantic connection is developing. They do this by cutting away from the couple twice, both times suggesting the passage of time. The second cut actually shows all the other chairs in the restaurant are up, so we know it’s getting late and maybe time for end-of-date hanky-panky. (This post has been rated “PG” by the Motion Picture Association of America.)

Anyway, back to the technology: I think the lenses are the most interesting sci-fi technology presented in all of the shorts I’ve seen for this series. For one, the lenses expand what Slate.com’s Torie Bosch calls “gamification” — the rise of video games as part of everyday life. The exercise and cooking games of Sight actually look fun, and yet you have the feeling that we’ve lost something when every daily task is broken down into a series of steps to be mastered; it’s the radical decontexualization of nearly every gesture and movement. 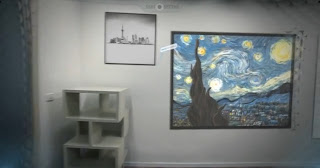 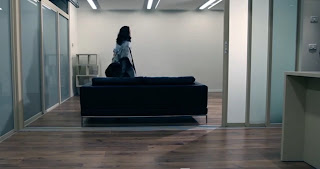 The “decoration” of Patrick’s apartment also ties in to life as it is lived in 2013, but in a different way. Patrick’s walls are bare, but using her lenses, Daphne can see virtual paintings and accessories as though she were looking at his personal webpage. It’s a reminder of how virtual spaces are becoming more and more elaborate and refined, even while we remain indifferent to our real public spaces.

Sight doesn’t just feel like a metaphor. It feels like it could be our lives in just a few years. Hell, I’m not even sure most movies set in the present have as much to say about the current state of technology.