As I’ve previously noted, I don’t have a lot to say about TV shows for the most part, but today I want to write about an episode in the last season of The West Wing that I heard recently.

I say “heard” because I wasn’t really watching so much as listening to it while I played Zuma in another window on my laptop. This seems like a bad confession to make, but I say it because a) I have a preference for embarrassing transparency in blogging and b) I’m not sure actually seeing the images would matter. Often when “watching” West Wing I’ll think of Stephen Dubner’s observation on his Freaknomics blog that Aaron Sorkin creations are worth just listening to, even without the visuals. (Admittedly, Sorkin wasn’t still writing West Wing in season seven, but even so.)

Anyway, the episode I want to talk about, titled “The Debate,” is unusual first off because it’s staged as a presidential debate and not as a regular episode. And I mean that literally: Except for the first few minutes, the show looks like a televised debate, with a studio audience, a (real news anchor) moderator, and lighting that’s a lot closer to an actual debate than an hour-long drama. As it turns out, the episode was shot live, but I didn’t know this while watching it, and frankly, I think the effect of this knowledge is negligible. Whether you agree with that philosophy, it’s what I’m sticking with for the moment.

END_OF_DOCUMENT_TOKEN_TO_BE_REPLACED

Last week, as I was putting together my post on Game of Thrones, I watched nearly every GoT trailer in an effort to find one that made the TV show look good. But I just couldn’t find one I liked.

Maybe it was the music, or that one hammy line of Stannis Baratheon’s, but I think it was as simple as feeling as though the show had missed a certain something.

Reading the last three books of A Song of Ice and Fire, I have found myself surprisingly drawn in by almost every character, and I don’t think the show is going to do that. Sure, I like all the big plot twists and the battles and the feeling that history is writing itself in front of me, but the novels are compelling in large part because George R.R. Martin sits down and tells a bunch of smaller stories of people making their own way through the tumult. Even when his world is impossible to take in with a single gulp, he paints it through personal experiences.

END_OF_DOCUMENT_TOKEN_TO_BE_REPLACED

Then there’s Game of Thrones, coming back for its third season on HBO on March 31. The first two seasons closely followed (I’m assured by my friends) the first two of the five books by George R.R. Martin, so after binge-watching the first two seasons last year, I was up to speed enough to plow through the third, fourth and fifth books. 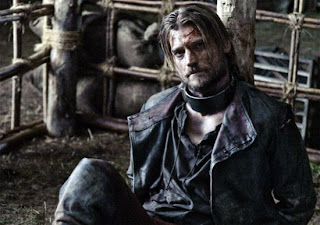 I don’t read a lot of fantasy, and I don’t watch a lot of HBO shows or cable in general, so I’ve been thinking about what makes GoT so particularly addictive for me. Besides for being fantasy, Game of Thrones is like a lot of other cable dramas, insofar as it doesn’t punish their characters for being immoral or amoral. Put another way, people get away with murder, rape, and all sorts of lesser evils, and fairly noxious characters occupy central roles and might even be seen as sympathetic.

END_OF_DOCUMENT_TOKEN_TO_BE_REPLACED

I will admit, it’s reductive to measure a show by the credit sequence that it begins with. But it’s not my fault that House of Cards and The West Wing can actually be meaningfully compared therein, even if you can’t completely encapsulate them in those few seconds.

With many shows, I feel like the opening credits are a quick look into how the producers would like you to think of the program, since it’s one of their few chances to deliver a context-free montage that is all about tone and nothing else. This was a problem for me with one particular program, Studio 60 on the Sunset Strip (which, like The West Wing, was a creation of Aaron Sorkin). I liked Studio 60 overall, but the few seconds that the title appeared onscreen were unnerving. Nothing about the show matched that sequence’s short burst of jazzy sax, coming on like a fragment of watered-down sleaze that had gotten lost on its way from a Vegas elevator to the world’s worst nightclub. (For the strong-stomached, you can see what I’m talking about below just after 3:40.)

END_OF_DOCUMENT_TOKEN_TO_BE_REPLACED

In the last week, with 30 Rock ending, I’ve been trying to come up with a viable theory of what made it special. My starting point was one bit that has echoed in my brain whenever I thought of 30 Rock in the past few years, a short exchange between protagonist Liz Lemon and the inimitable Jack Donaghy (played by Alec Baldwin and Alec Baldwin’s glorious hair):

It’s a 30 Rock classic and I came across it in two prominent best-of lists (on salon.com and avclub.com). This isn’t the only kind of joke on 30 Rock, but it feels like the most distinctive kind. If I have to explain it (and, yes, explaining it takes half the fun out of a joke), I’d say the laugh lies in the wild exaggeration of a stereotypical trait, in this case, Jack’s smug pretension.

END_OF_DOCUMENT_TOKEN_TO_BE_REPLACED

Yesterday I finally got around to a great piece by Andrea Seigel in the New York Times Magazine. It’s a really incisive analysis of reality TV and deserves to be read.

As with many things, when I complain about reality TV, I feel obliged to complain about it in an entirely new, fresh way. Sensing that this may be impossible, I have to make due with complaining in a way that’s merely unusual. 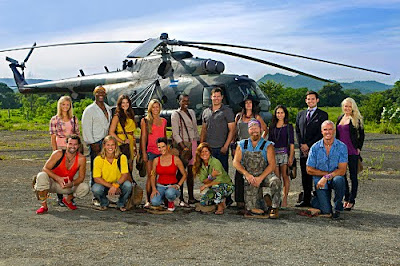 Anyway, my complaint runs like this: The problem with the little reality TV I’ve seen is not that it’s too cheap or tawdry. It’s that it isn’t tawdry enough.