One the nice things about my minor obsession with time-travel movies is that there are so many of them to compare and so many manners of temporal discombobulation in fiction to consider. Almost any variant of time-travel can be found in some movie somewhere, so potential parallels abound, even among movies and shows whose only similarity is a questionable use of physics.

Which leads me to my comparison du jour, between last summer’s would-be blockbuster, Edge of Tomorrow, a Tom Cruise action vehicle, and the Star Trek: The Next Generation episode “Cause and Effect.”

The connections are obvious if you know both: Edge of Tomorrow is about Major William Cage (Tom Cruise), who experiences one day on repeat, ending each iteration with his death. Upon dying, he awakes at the beginning of that same day, except with the knowledge of every pass-through he’s done before. Similarly, “Cause and Effect” reiterates a single (roughly) 24-hour period, each time ending with the destruction of the Enterprise and everybody aboard.
END_OF_DOCUMENT_TOKEN_TO_BE_REPLACED

Hey, quick blog-related note. I know that I promised a link to my Barefoot Contessa essay over at the Brattle Film Notes blog. Here’s an essay on something else to tide you over until the arrival of that other piece, which I know you have been waiting to read with bated breath and suffering many sleepless nights over. Please, please, don’t do anything rash in the meantime, and thanks for reading.

Update: Here’s that link to the essay link, finally. But rest assured I will still allow you to read the essay below, as well.

Probably more than with any other show, my relationship to The Walking Dead could be described as an addiction. As I watched the third season this past week, I became aware of the almost existential dilemma it creates. On the one hand, I am gripped by the desire to see what happens next, with the visceral reaction that entails. On the other hand, by the time the plot has played out and the show ends, it occurs to me that what I was waiting for could be described as mere information — I wanted to find out who would live and who would die, and that’s about all.

Anyway, after some 12 hours watching season 3, I have had lots of time to cogitate on whether the show is about something more.

(This video is, err, not for the faint of heart:)

I mean, duh, the show is about the characters. But if you were to say that, I would want to reply, in my best/worst stoner voice, “No, man, but what is the show about?” The emphasis on “about” would be an attempt, maybe inarticulately, to explain that what I really want to know is how the show represents the world and what it’s like to look through its porthole view onto the universe. Which aspects of existence, besides the gut-clenching tension of watching people barely survive, does the show remind me to think about?
END_OF_DOCUMENT_TOKEN_TO_BE_REPLACED

I caught Upstream Color a couple of weeks ago. It’s the latest movie by the writer/director/actor Shane Carruth, whose previous film was Primer, from 2004.

For the first hour or so, Primer is comprehensible: It’s about time travel, yes, and it often seems like Carruth is purposely confusing you, yes, but still, you can keep its logic straight, depending on how much mental RAM you have and, of course, depending on how much you actually care. I watched it for the second time over the weekend and found that it wasn’t until very near the end of the first hour that things got confusing.

But “confusing” doesn’t really do justice to the subsequent disorientation. Primer gets utterly mind-boggling, and quickly, to the point that within 10 minutes you’re not even sure the film is logical, but you can’t prove it because it’s so hard to figure out what’s happening.

Upstream Color is much milder by that measure. The first 20 minutes or so involve a woman being assaulted and forced to inhale a worm (really), which (for unclear reasons) puts her into a trance, during which she is manipulated into taking out a lot of loans and giving the money to the guy who wormed her. What follows builds up small mysteries but mostly resolves them enough for you to follow the story if you’re paying close attention. By the end of the movie, and pretty regularly through it, I felt like I had pieced together what I was seeing. That’s not to say I understood it completely at the time or that nothing was still a mystery at the end. But on whole, I “got” the movie, especially after a post-screening consultation with a friend. When I got home that night, I got whatever remainder of definitive answers there were to be had via a tidy FAQ on Slate.com that pretty much tied up the loose ends.

Yet understanding the movie was not as satisfying as I might have thought it would be. I mean, I liked the fact that I had to puzzle it out and really think about it. But finally solving it was not actually what I had been hoping for, at least in retrospect. I wanted it to stay unsolved, and be unsolvable.

Doing some research for this post, I googled “most puzzling movies” (looking for a way to substantiate a claim that Primer was the most puzzling of them all), and one of the lists I saw included Mulholland Drive. I wanted to object; the comparison is misleading. David Lynch’s movie is irredeemably confusing, but confusing in a distinct way from Primer and Upstream Color.

When I first watched Primer five or six years ago, I immediately thought I had found a flaw, but I wasn’t sure, and it’s taunted me ever since, daring me to re-watch it until I could either perceive the logical cohesion or find any mistakes. Its promise is that, when the dust is settled, all of its mysteries are ultimately knowable and comprehensible; just searching for clips for Primer brought three or four YouTube videos which were expressly about explaining the movie. For the moment I’ll just believe them when they say that to understand all the time travel, you need nine separate timelines.

Still, it doesn’t matter if Primer is actually thoroughly logical. Even if it isn’t spot-on in that aspect (and frankly, I’m still not convinced), the ethos is there: Either Primer‘s plot really is internally consistent, or the movie has blinded us with science and is hoping we won’t notice any errors. In the end, though, it doesn’t matter which it is. It just matters that the movie aspires to that cohesiveness.

To see how this is qualitatively different than Mulholland Drive, you have to see that Carruth’s movies never make you ask whether what you’re watching even happened in the story. (Whether that’s what you want in a movie is another question.) It wouldn’t normally occur to you to question this because movies rarely do. That is, every scene shows a piece of the universe that the film purports to be about, even if that universe has multiple, parallel timelines. In each movie, there are things that would be impossible here on Planet Real Life — time travel in Primer and the one odd but crucial unreal element of Upstream Color. But besides for this one bent rule in each movie, the structure of the universe is coherent and every image presented is implicitly a documentary of that world, or, if not that story universe itself, it is the dream or memory of a single character in that universe.

In a second I’ll get to how Mulholland Drive is a good counterpoint to Primer, but before that I feel I ought to make an admission: After I first saw Mulholland at a special screening of some sort at the University of Minnesota, probably in 2001, I told my friend that this kind of artsy stuff didn’t do that much for me. What was I dying to see? Why, Episode I, of course. (#facepalm, but you should at least give me credit for owning up to this.)

I’m still a bit cool on Mulholland, but for reasons unrelated to its lack of logic — I just don’t like how it looks and I think some of it drags. My appreciation of its confounding structure, however, has only ripened over time, and I have come to prefer its brand of ambiguity and confusion to that of Primer.

The difference is not actually too hard to define. Watching Mulholland, you can’t perfectly map what you’ve seen into a hypothetical world, and it’s clearly designed to thwart your attempts to do that. Lynch’s film doesn’t even use science fiction so much as it exudes an unwillingness to give the normal clues about what the ontological status of what we’re watching is; we see things that might be dreams and memories, but it’s never clear. Some aspects and scenes are just untethered from the story; we don’t know how they fit into the universe that is being built.

Mulholland may not even be the best example of this phenomenon in David Lynch’s movies, but it will do, especially if you pair it with Lost Highway. Here’s how David Roche puts it: “Lost Highway and Mulholland Drive are mysteries, not because of their genre, but as films, and are held together by the spectator-detective’s desire to make sense of them.”

In more jargony terms, Roche explains it this way:

…when Pascal Couté attempts to establish a diegesis for Mulholland Drive in which the first part of the film would represent “Diane Selwyn’s dream” and the second what really happened, he is forced to admit that there are “three impossibilities,” notably the fact that the dead girl in the dream is in the exact same position and filmed in the exact same manner as Diane at the end of the film.

(Check the link above for details on Roche’s citations of Couté, if you are a dogged pursuer of such things.)

For “diegesis,” you could probably just read “explanation of the story.” Anyway, Roche puts it more plainly when he says that in these movies, “answering the questions ‘what happened and in what order?’, turns out to be impossible.”

As it happens, I prefer the impossible to the possible. Maybe some day I’ll figure out why.

On Tuesday, I began this post about the three flavors of time travel. The gist is that time travel films can be categorized based on their answer to the question ‘If I go back in time and try to kill my grandfather before he makes my existence possible, what will happen?’ I left off with ‘closed loop’ time travel, which is basically time travel in a universe where you cannot affect the future. Today I’m moving on to ‘open loop’ and ‘continuous-ridiculous’ universes. 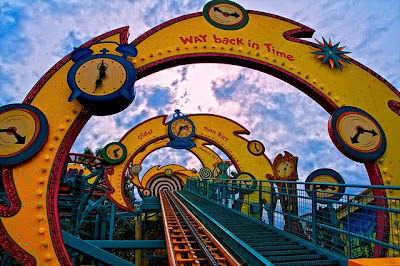 In an open loop universe, if you go back to the past, you may in fact be successful at killing your grandfather. (‘Successful’ here is a purely clinical word.) But instead of going into the same future that produced you, you will continue in a new timeline that has split off, one in which you are never born. Time traveler you sticks around, beginning from whenever you popped into this point in the past, but now you can never go back to the future world you came from, because you’ve made it cease to exist; there’s no future with a you in it, only the present with the anachronistic you. In this case, the thread of your narrative that is pulled back to intersect with the past does cross paths for exactly a moment with the timeline that will eventually produce you. But it’s an ‘open loop’ because even as your narrative crosses that timeline, you create a new branch that goes off on its own trajectory.